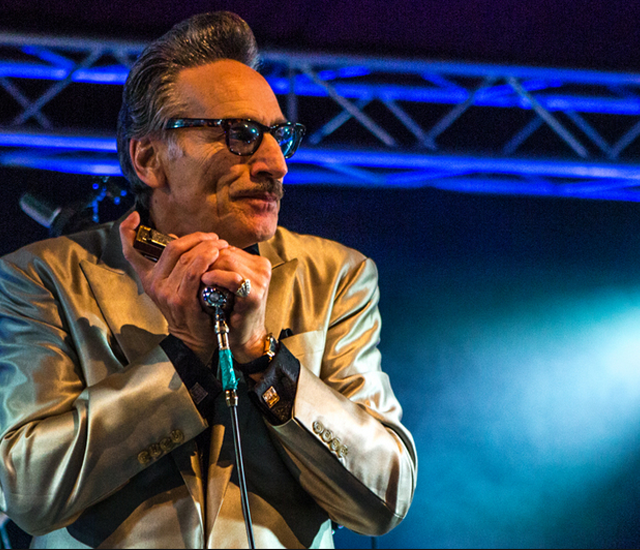 Rick Estrin ranks among the very best harp players, singers and songwriters in the blues world. His work on the reeds is deep in the tradition of harmonica masters Sonny Boy Williamson II and Little Walter Jacobs, while at the same time pushing that tradition forward. The Associated Press calls his harp playing “endlessly impressive.”

In addition to his harmonica and vocal skills, Rick Estrin is a songwriter of unparalleled talent. Critics have compared his original songs to the work of Cab Calloway, Louis Jordan, Willie Dixon and Leiber and Stoller. And his hipster, street-smart vocals are the perfect vehicle for driving those songs home. Blues Revue says, “Estrin has created some of the finest blues songs of any artist on the planet. His carefully wrought lyrics penetrate human weakness with the precision of a boxer, though more often than not, he chooses to leave you laughing after the blow’s been struck.”

Estrin won the 1994 Blues Music Award for his composition My Next Ex-Wife and has written songs for a growing legion of other musicians. Three of his songs found their way onto Grammy-nominated albums: Don’t Put Your Hands On Me (on Koko Taylor’s Force Of Nature), I’m Just Lucky That Way (on Robert Cray’s Shame + A Sin), and Homely Girl (on John Hammond’s Trouble No More). “I like songs that tell stories,” Rick says, “songs that are well-crafted and meaningful.” Along with Dixon and Leiber and Stoller, Estrin cites Sonny Boy Williamson II, Percy Mayfield and Detroit bluesman Baby Boy Warren as his major songwriting influences. Billboard says Rick writes “fabulous, remarkable original material.” Besides Estrin’s streetwise songwriting and musical skills, he is among the most entertaining and colorful showmen around. His quick wit and his signature look-coifed hair, pencil-thin mustache and sharply pressed, custom made suits-add even more color to his performances. “People don’t go out to see people who look like themselves,” says Rick. “They want to see something special. I was schooled in this business to be a showman, and that’s what you get when you come to see me perform.”

Rick Estrin, "Getting Out Of Town"